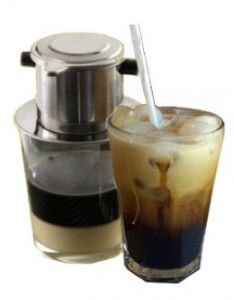 That’s what they call coffee in Vietnam – ca phe. It’s pronounced almost the same (at least to my untrained ears). I spent almost a week in Saigon (now called Ho Chi Minh City) and I have to say that I had more coffee than I should have had.

Vietnamese coffee has long been known to coffeeholics, but I have to admit that it was (probably IS) not my favorite kind. Still, I couldn’t contain my glee at the fact that coffee could be bought everywhere for very cheap. Saigon has tons of coffee shops – much like the ones you see in other cities, except that they normally have tables and chairs on the footpath. I suppose it’s the French influence, and I love it!

There are cheaper alternatives – the sidewalk vendors with their little carts. They have their own mini tables and even littler stools. For half a dollar, you can get a cup of Vietnamese coffee – iced or hot!

Needless to say, I started my day with several small cups of coffee at the hotel. They brew their coffee in a more modern way, using a drip machine. As the day went on, I would go walking around the city, with at least 3 coffee stops. I normally like my coffee hot, but the heat and humidity in Saigon forced me to change my habit.

Coffee lovers who are looking for more than their usual dose of caffeine should drop by Saigon. You might not want to leave.