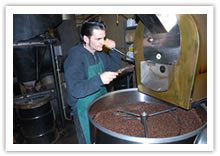 If you think that the President-elect does not have enough influence as of yet, think again. His popularity has reached even the realms of coffee! Longfellow’s Coffee is a shop specializing in our favorite brew plus other food items such as sandwiches. They operate primarily in the New Jersey area and they are working on opening outlets nearer to New York. They are quite well known to locals as offering the best coffee in their area. Indeed, there are many who testify that they pass up on the Starbucks and other shops just to get their Longfellow’s coffee.

Now, Longfellow’s is bound to get even more customers with their new blend, named after President-elect Barack Obama. The inspiration for the Obama Blend comes from the President-elect’s own background, which involved three prime coffee areas in the world: Kenya, Hawaii, and Indonesia. This is what the people at Longfellow have to say about their newest blend:

Wondering what coffees grown in these regions might combine for a satisfying coffee sipping experience for you, Longfellow’s Coffee sought advice and worked closely with Kobricks, which is one of the nation’s leading coffee roasters, to see what they might develop together.

The craftsmen at Kobricks and Longfellow’s Coffee selected the best beans from each of the regions — Kenya AA (Kenya), Hawaiian Kona Extra Fancy (Hawaii), and Sulawesi (Indonesia). These beans rank among the most prized and expensive coffee beans grown.

Next they experimented to find the just-right proportions for the new blend. Finally a master roaster brought these exemplary coffee beans to a Vienna roast in order to free their distinctive characteristics.

Then came the moment of truth — the time to taste the new brew. Everyone present at this remarkable event suddenly knew they were experiencing something that was very much out of the ordinary. The Longfellow’s Coffee Obama Blend emerged as a brilliant brew, full-bodied and smooth.

Want to get your hands on some? Visit the Longfellow’s online store if you do not live near an outlet.