Who on earth would need such a cup??? No one! That is why this cup was designed for people who go to space; astronauts, I think that’s what they’re called.

Seriously, though, news has it that astronaut David Pettit got tired of having to sip his coffee from an aluminum bag. Apparently, drinking coffee that way takes away from the whole experience of enjoying a cup of joe. The result of this frustration is a very good thing (at least for those who have plans of going to outer space) – the On-Orbit Coffee Cup. I don’t think I can really explain how it works except that it takes advantage of the principle of surface tension. That is how far I can go without making a fool out of myself by trying to be all scientific and technical. Take a look at the illustration below from Dvice. I think that in this case, pictures are much better than words. 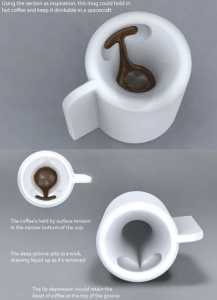 Got that? Even if you didn’t really understand the science behind the cup, it would still be cool to have one of these, don’t you think? I just wonder if it could still be used here on earth, where gravity actually exists?