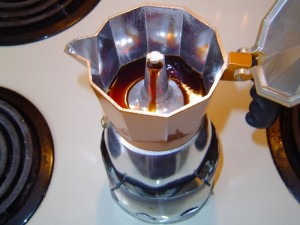 Based on the idea of brewing Coffee with steam pressurized water, these ‘Moka pots’ are more common in Europe, these small machines (or machinetta in Italian – another name for the devices) were first patented in 1933, and the design hasn’t changed much since then.

After filling the boiler with water, and adding the finely ground beans of coffee to the basket, the well sealed unit is then placed over a medium to medium high heat on the stove. The steam builds up and the pressure eventually forces the boiling water rapidly through the valves, up through the beans, and into the collecting chamber. You’ll be able to tell that it’s ready, as the machine starts to gurgle – meaning that the water is almost empty. As with the percolators, the coffee shouldn’t boil, and with practice, you’ll get to the point where you can estimate the time it’s ready.

Compared to Drip machines, the taste will vary greatly depending on the bean variety, the heat used and firmness of the beans, the quality you can get is very high – as the water gets very hot (often well above 100c) but doesn’t boil with the beans, the caffeine and flavour is extracted much more effectively, so you can get a stronger brew. Because of this they are sometimes referred to as ‘Stove top Espresso makers’ – which is true. They often produce coffee of a similar quality, and adding a small amount of sugar or carbonated water to the water chamber will often produce the same Crema that is produced in traditional espresso machines!

The machines require periodic replacements of the seals and filters, and a check to make sure that safety release valve isn’t blocked. Aside from this, making sure that the machine is cleaned well with hot or boiling water after it’s been used will remove the oily residue from the Coffee brewing process – but make sure you don’t use any soaps or detergents which would strip away the protective coating.