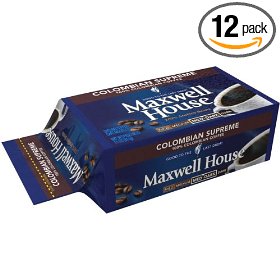 I used to drink Maxwell House all the time. In fact, that was my husband’s favorite brew. Then we discovered another local source, and we have stuck to that since then. Anyway, we still have Maxwell House every now and then, and so when I heard about the recent developments, I thought it would be interesting to write about.

So what’s going on over at the Kraft house? Well, according to news reports, they have increased the price of their Maxwell House 100 percent Colombian ground coffees. The price increase is quite considerable at 19 percent!

Before Maxwell House drinkers go nuts, here is what the company has to say, courtesy of Reuters:

The price hike, which went into effect on Tuesday, was due to “supply issues driven by poor crop yield,” a Kraft official said in an email to Reuters late Tuesday.

The Maxwell House 100 percent Colombian three-lb equivalent can was raised by $1.50 or about 19.4 percent, the company said.

I actually saw some news reports on the problems in Colombia with regard to their coffee crop, and they seem to validate the reasoning that Kraft has provided for their price increase. Actually, even other brands have been doing the same thing. Folgers, for examples, has also increased their prices by roughly the same amount.

Maybe it’s time to switch to other coffees?