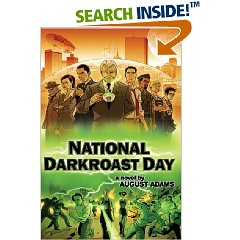 When I read this e-mail in my inbox about National Darkroast Day, I initially thought that it was about some festival or celebration about coffee. I was wrong. It was actually a promotional e-mail about a new novel by August Adams.

So what is National Darkroast Day about? The synopsis of the book reads:

At the turn of the 21st century, the CEO of Darkroast Coffee—America’s largest and most popular corporation—launches a major holiday called National Darkroast Day. The holiday is supposed to be a national celebration complete with baristas, festivities, free coffee, and an entertaining Moon Laser Show. Secretly, National Darkroast Day is an evil plot to take over and destroy the entire country. A group of heroes must race against the clock to stop the CEO and save America. In doing so, these heroes unravel a blockbuster secret about Darkroast’s CEO and company origins—a secret that makes their battle a death-defying showdown against the ultimate enemy.

I have not gotten a copy of the book so I have not read the whole thing but reading the synopsis, it made me think of Starbucks for some reason. Now I am not saying that Starbucks is an evil empire trying to take over and destroy any country but the words “largest” and “most popular” seem to fit, don’t you think?

I went through some reviews at Amazon and it seems that people who have read the novel enjoyed it. If you like coffee and you would like an entertaining read, this novel just might do it for you.