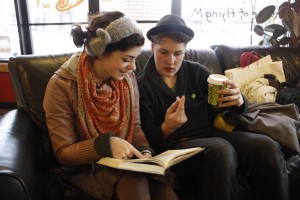 Back in college, I too occasionally stopped by a coffee shop to rush a paper while having a quick snack. However, I never really spent hours on end occupying a table with books and papers scattered all around me. With that said, I’m not saying that I preferred libraries for studying. If anything, I spent less time actually studying in the library than I did at coffee shops. I guess I just prefer studying in my own room.

My problem with studying in coffee shops is that the place provides too much distraction. I usually end up people watching more than studying when I’m in a public place. As for the coffee advantage, I can always just brew a cup of coffee right at my own place. Besides, I hate having such limited table space for my clutter.

However, I do agree that in some instances coffee shops are one of the best places to “study”. One perfect example is on-the-job training for baristas, which I know doesn’t count since it’s their job already! Another “subject” where coffee shops would serve as a perfect place for studying is language.

If you want to learn a second language, the perfect place to do it is not in some classroom repeating each word the teacher tells you, but practicing your new found knowledge conversing with locals. This means heading out to a public place such as a coffee shop in the country where the language is spoken as a primary language. In short, if you want to learn Thai in Bangkok, learn it from teachers there, but practice in coffee shops where you’ll be forced to converse with locals.

Aside from that, I can’t think of “subject” where coffee shops are that appropriate as a venue for learning. How about you, do you study in coffee shops?