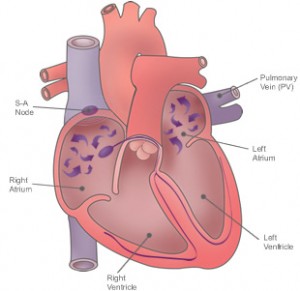 I was not familiar with the term atrial fibrillation before I read an entry in the Atrial Fibrillation Blog. This condition is described as:

Atrial fibrillation (AF or afib) is a cardiac arrhythmia (abnormal heart rhythm) that involves the two upper chambers (atria) of the heart. It can often be identified by taking a pulse and observing that the heartbeats don’t occur at regular intervals, but a conclusive indication of AF is the absence of P waves on an electrocardiogram (ECG).

In simple terms, it is a condition wherein your heart beat is not regular. So what does this condition have to do with coffee? Apparently, coffee has been pinpointed to be bad for those who have AF. I remember when I was a child – the adults would say that coffee will cause irregular heart beat or palpitations. I suppose this was their version of the relationship between coffee and AF.

So does coffee play an important role in AF cases? According to the blog entry that I read:

Clinical trials have not found coffee or caffeine intake equivalent to 5-6 cups/d to increase the frequency or severity of cardiac arrhythmias in healthy people or people with CHD. A large prospective study in the US that followed more than 128,000 people for 7 years found no association between coffee consumption and sudden cardiac death. More recently, two prospective studies in Scandinavia found no association between coffee consumption and the risk of developing atrial fibrillation, a common supraventricular arrhythmia.

There you go – coffee does not really affect AF directly. Good news for those who have the condition!