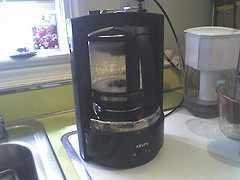 I actually feel vindicated. I have long been a proponent of brewing your own coffee at home. One of my main reasons has always been the financial aspect. You spend so much less by making your own coffee. Of course, that is not to say that I look forward to spending time in coffee shops every so often, but that’s a different story. More than the money, however, another reason I like brewing my own coffee is that I am in more control as to the taste and flavor of the brew. While some coffee shops get the taste right according to my preferences, not all of the ones I have visited are that good.

So anyhow, I read this news article on Reuters. It said that more Americans are brewing coffee at home. Here’s the juice:

Daily coffee consumption in the United States was steady this year compared to 2008, while the number of people making their coffee at home rose, the National Coffee Association of U.S.A. said on Saturday.

Data from the 2009 National Coffee Drinking Trends survey, which polled more than 3,000 adults in the United States by telephone in January and February, was released at the NCA’s annual convention in Boca Raton, Florida.

“Even if economic conditions cause some to alter their coffee choices, they are nonetheless continuing to enjoy coffee at levels very much on par with recent years,” he said in a release.

That’s what I am talking about. You do not have to pay an arm and a leg to get a good cup of coffee! All you need is some smarts – brew it your own way and enjoy it every day!