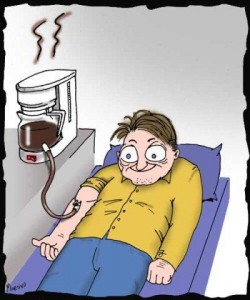 We all know that, in a way, caffeine is a drug. It gives you a buzz (quite unlike the buzz I get from Jack and Coke, though). It can make you high strung. It can give you the energy to keep going and going…and going…just like the Energizer bunny.

But we also know that it can have some negative side effects. Headaches. Tummy problems. Addiction?

According to experts, caffeine should not be taken lightly. The Daily Comet narrates:

“It’s the type of drug that shouldn’t be taken lightly,” said Bill Aronson, a representative with the Caffeine Awareness Association, a group claiming that caffeine has long-term adverse health effects, such as high blood pressure and anxiety disorders. “Caffeine is the type of drug abused frequently because it’s so accessible.”

Particularly popular among college students, caffeine has become an increasingly central part of many young people’s lives, said Aronson, adding to the risk of chronic health problems as a result. He believes that young people use diet sodas and coffees for a variety of irresponsible activities, like extreme late-night study sessions and weight loss.

“The more that you take it, the more that you want to take it,” said Aronson. He said conditions such as depression, mood swings and irregular heartbeat can emerge after pro-longed consumption.

I think that I am already experiencing some of these side effects, especially irregular heartbeat (smoking does not help either). However, I think that awareness and moderation is the key. There is no need to treat coffee as if it were coke (the powder) or something like that!