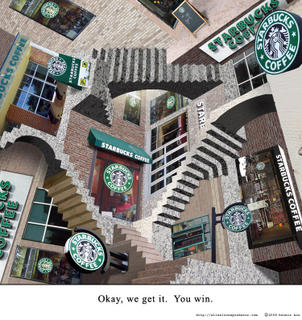 My team had a couple of brainstorming sessions last week and to have a change, we all decided to hold the sessions outside of the office. We had two choices – Starbucks (which I was the proponent of) and The Coffee Bean and Tea Leaf. Unfortunately for me, most of the team wanted to go to the latter. This started a whole conversation on which coffee shop was better. Until now, I am not convinced that Starbucks is on the losing end.

However, I ran across some blogs today that seem to be refuting my belief that Starbucks is THE coffee shop. There’s this German IT professional who is now located in California, who shared a story about Starbuck’s poor selling method – making them seem desperate to sell their coffee beans. I was thinking, why should they be desperate if it’s good coffee anyway? Then I read Starsight’s take on how Starbucks is burning their coffee beans. Hmm, now that I read his blog, I seem to recall several times when I thought the coffee tasted a bit on the off side. Or maybe I am just being influenced by Starsight’s post.

Then I read BBC’s feature on why Starbucks’ sales have gone cold. It goes along the lines of Starbucks being too common that it is not cool to be seen with a Venti in your hand anymore. So what’s the deal? Maybe in the business sense they are doing things wrong. The more important thing for me is good coffee. Now I have to run along and get me a café latte and see if they are indeed burning their beans.