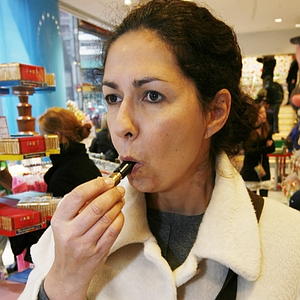 If you think that you are too busy to even gulp down a shot of espresso to give you that jolt in the morning, think again. This professor from Harvard (whom some have described as nutty) either has no time to mess around waiting for a cup of coffee or has too much time on his hands. Either way, he was able to create a whole new product that can give you that much needed wake me upper: inhalable coffee.

Dubbed Le Whif, the product is just like a contraption that would normally contained candy powder. In order to “eat” the candy, children would have to suck at the tube – similar to asthma inhalers. Instead of the usual flavors, though, Le Whif is pure caffeine. In fact, one tube contains 100 mg of caffeine – the same amount that you would get from a shot of espresso.

Of course, the product was designed so that the particles will not go straight to your lungs. Instead, the coffee (or chocolate; there is another flavor) particles are big enough that they will stick to one’s tongue and cheeks when inhaled. This results in the person actually getting a taste of the flavored concoction inside the tube.

Each tube, or stick, costs $3 if bought individually. They also come in boxes of three, which go for $8 – you make a dollar savings.

What do people have to say about Le Whif? Let’s just say that hours after it was launched, the candy store went out of stock of Le Whif!

I think I shall be conventional and stick to my brewed cup in the morning. How about you?