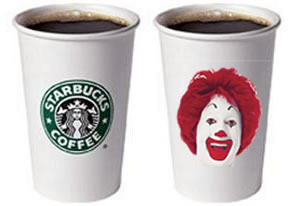 …and I’ll tell you who you will vote for President. Amazing how we can use various things to predict future events, isn’t it? BIGresearch conducted a survey recently. The idea was to see if you can tell which presidential candidate a person prefers based on which coffee they like better. And the choices are:

Coffee:
a. McDonald’s
b. Starbucks

“If I were McCain, I would carry a McDonald’s coffee cup a lot,” says Gary Drenik, president of BIGreserach, which conducted the survey.

McCain made gains with surveyed coffee drinkers in August, as the percentage of people who say they prefer Starbucks slid 14 percent since February. Dunkin’ Donuts, meanwhile, has the highest percentage of customers who remain undecided (22 percent).

Now if you have any sense at all, you would be thinking that this is nothing conclusive. After all, you have demographics and other factors to consider. What are the other factors that lead people to prefer Starbucks over McDonald’s? Could the location (accessibility) have something to do with it? Perhaps the background of the people who prefer Starbucks or McDonald’s? Laura Stoker of UC Berkeley has the same idea:

However, the correlations are not causations, as Laura Stoker, an associate professor at UC Berkeley who specializes in political psychology, is quick to point out. Rather, demographics like age, income, race and location come into play, she says.

“A survey [participant] cannot express a preference for Dunkin’ Donuts if they’re not around where they live,” Stoker says. “It’s not just about whether conservatives are drawn into one place or another; the places where Starbucks are located which are urban tend to have a more Democratic constituency.”

Ahh, there you go. Still, it is amusing to read about such surveys, isn’t it? So which do you prefer, Starbucks or McDonald’s?;)