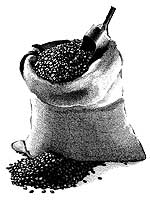 How long should you keep coffee beans? We are taught that coffee should be consumed as soon as possible. Apparently though you can store the unroasted beans for a very long time – 30 years in fact which is what Brazil did. The beans they say have lost none of its flavor, just some of its color.

With the world price for coffee at a high, they figured now is a good time to sell. They were aiming to zero out the federal stock of coffee. They auctioned off all the bags of coffee they harvested from 1977/1978 and sold them at a great price. The bags were sold at a premium of 245 reais (58 pounds)  a bag.

The Brazilian government has been selling their coffee stocks since early 2006. They have already earned over 195 million reais from 1.13 million  coffee bags. Most of these were 20 year old beans.

The simple truth is that there isn’t that much coffee around. Everybody knows it. Those who can afford to are acquiring the stock and storing them; preparing for a rainy day as it were.

This has mainly been due to the drought. It isn’t just Brazil that is affected either. It does hit their economy hard however. Brazil is the source for half of the world’s coffee supply. They have been the biggest producer and exporter of coffee for years. Now they are selling the federal stock for the Funcafe or federal coffee development fun which finances the growers.
[tags] coffee,stock,unroasted beans,30 year old coffee,Brazil [/tags]