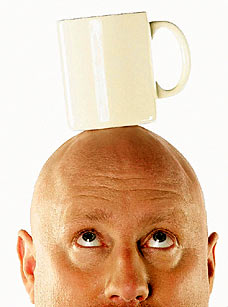 If you have ever needed an excuse to justify your love of coffee, here’s one that our male members with decreasing hair will love. A study conducted at the University of Jena in Germany shows that caffeine may be the key to keeping your full head of hair.

The researchers concluded that caffeine helps prevent damage to the hair caused by dihydrotestosterone or DHT. When the hair is exposed to too much DHT baldness results.

For those who are taking this study to heart, do note though that to get the same effect as achieved in the study. A person would need to drink an average of 60 cups of coffee a day. That’s a bit much for anyone. Just pray that someone will find a way to make a new and effective way to get the follicles the caffeine it needs everyday before you drown in the brew.