Who among the famous celebrities cannot do without their coffee? Like most people, these famous people are not immune to the alluring taste of this beverage. Let us try to look into the coffee drinking habits of the stars we adulate.

Leonardo DiCaprio loves his coffee so much that he actually has coffee affiliation with La Colombe Coffee as part of his humanitarian efforts. The high-end line of green coffee beans goes by the label Lyon. The beans are farmed in Haiti, Peru, Ethiopia, and Brazil.

The coffee was especially made by Todd Carmichael to fit the taste profile of DiCaprio. DiCaprio himself wondered at how the coffee captured his personality. It is an even greater wonder when we think of how this velvety coffee blend is able to help many person in need.

Britney Spears is a certified Starbucks devotee. Is is quite rare to see her on candid shots without holding her favorite beverage. Even Simon Cowell joked about her “demand” for coffee when she was a judge in X Factor USA.

Drinking coffee is one of her indulgences aside from retail therapy. Her favorite is iced coffee and nothing can stop her from getting that drink. As photographers take her picture from anywhere, chances are she is holding a cup of coffee in her hand. 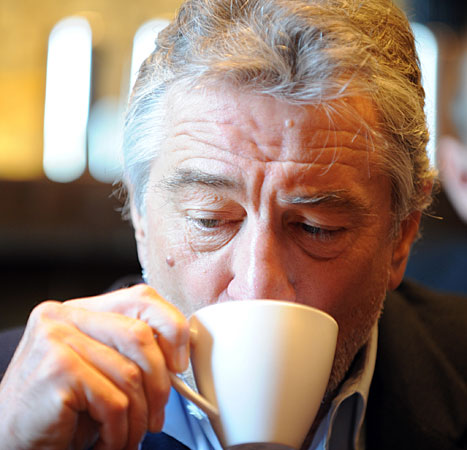 While not drinking coffee on screen or in private, Robert de Niro does his coffee drinking to the tune of 5,667 pounds. This expensive coffee drinking session was actually an auctioned coffee date won by  a fan. Was the coffee and talk worth such amount? It probably was for the excited fan.

The beneficiary of the funds was the Robert F. Kennedy Center for Justice and Human Rights. This just demonstrates how celebrities can use their popularity for a good cause. What easier way to help than doing it with a delicious cup of coffee?

Well here’s someone who can definitely carry her own load of coffee with ease. Renee Zellweger does this pretty much often for her friends. She can certainly handle this task well and she doesn’t seem to mind doing it.