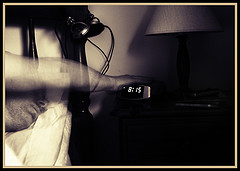 How many times have you woken up to the smell of good coffee? How did that make you feel? According to some Japanese researchers, the mere aroma of coffee may be enough to give you the jolt that you need to wake up. Fancy that – you don’t even have to drink coffee, just smell it and you’re awake!

They conducted the research on 30 rats, which they kept awake for 24 hours. After that, the exposed half of the rats to coffee – well at least the smell of roasting coffee. The result was that those rats which were exposed to the smell of roasting coffee were able to return to a non-sleep deprived state and were less stressed as well. Of course, this is not to say that the exact effects can be observed in humans. Still, we all know how similarly rats and humans react to many things.

In any case, how is this going to be useful to us? Hmm I can think of a couple of ways…if my partner wants to sleep in and I want to wake him up without having to argue, I’ll roast some coffee beans right under his nose. That should wake him up, shouldn’t it? Oh, and the Japanese researchers were saying that maybe, the smell of roasting coffee can be piped into factories to keep the workers up all night. Maybe the same thing can be used for office workers who seem to love taking naps at work? NOOOOO…