Coffee lovers such as the busy professionals who don’t want to make their own caffeine-filled drink often just want to order this from their favorite cafes or coffee shops. And why not? It’s fast, easy and effortless. 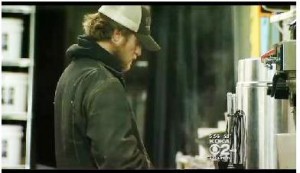 In Pittsburgh, Pennsylvania, there’s one business owner who prefers to make a difference in his community by bringing coffee to the people. Chris Rhodes who owns this small-batch coffee roaster franchise called Zeke’s Coffee in East Liberty recently took it to the streets to bring his coffee to customers instead of the other way around.

The bike called the Blue Collar Coffee Cab was designed and built at the Zeke’s roaster and this campaign is aimed at recognizing the efforts of construction workers and business owners who are making East Liberty a better place.

Observing the many construction projects going on in his area, Rhodes thought it would be a great idea to bring his coffee to people who he believes make a big difference in the community. Specifically, this coffee maker and businessman said he loves to be part of change in his locality and when he sees one, he wants to help out the workers.

For his early morning trip to construction sites, Rhodes carries some 100 pounds of coffee on the back of his bike. By mid-morning, he delivers to laborers for their coffee break.

To connect with his customers outside his coffee shop, Rhodes starts a conversation using his brew. This is his way of learning about what’s new in his community, what changes are coming up which he wants to become a part of.