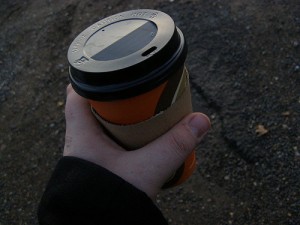 We’ve all had the problem at least once. Do you take your coffee to go, or do you drink in-house? A lot of it might depend on how much time you’ve got (I know when I was studying, it was normally a rush from home to my lecture, which had started twenty minutes ago!), but what if that’s not a time restriction?

First off, lets look at what you’re drinking. I’m sure if you’ve got thirty minutes for your drink, rather than being late already, you’d be able to find something a bit more…exciting. You could have a look at the menu, debate trying something new, and then consider what would happen if you didn’t like it (quite simple, order something you know you’d prefer!) If you’re in a rush, you’d probably be a bit more likely to order your favourite, in a snap second judgement.

What you’re drinking out of might also be different – a few places I know serve out of the paper cups, which I detest – especially in Winter. Cold hand, plus very hot coffee is quite painful, especially through a thin paper cup – even with an extra layer of cardboard around it – it’s not as bad if I’d have one of the wide range of thermal cups that are available – but it might ruin it a bit if I was drinking a frothy drink.

I don’t know about you, but I’d rather not take a ‘proper’ coffee cup outdoors when I’m walking around. Last thing I’d want to do is drop it and lose my precious java, as well as a cup – hence the thermos cup firmly planted in my hands most days. What’s your preference when you’re out and about? Sitting down in-house, or drinking on the move?