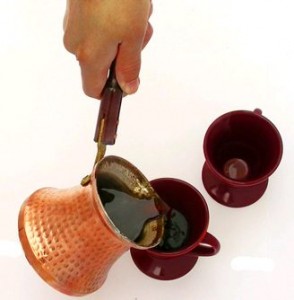 I am sure that you know that there are various ways by which you can brew coffee. But do you know them in detail? I certainly don’t! All I know is that my drip coffee machine works just fine. I found a very informative article on various coffee brewing techniques and thought I’d share them here.

Thanks to Alexander Haas for this information. According to him, there are 6 primary ways of brewing coffee. Here they are.

Middle Eastern, “Turkish” or “Greek”
Middle Eastern, “Turkish” or “Greek” brewing involves boiling in water coffee that was ground into a very fine dust. Traditionally the coffee is often brewed (boiled) with large amounts of sugar, but it may be brewed without the sugar. Middle Easterners seem to like to add spice to their coffee, and their spice of choice is often cardamom. The coffee is not filtered from the liquor and one is left with a pungent, thick, and muddy brew. In the western world this method is more of an occasional indulgence as opposed to an everyday brew.

I have read about how the Middle Easterners like their brew really thick. I have not tried it myself but I am not sure about having grounds in my drink. The spices, however, make sense. I have only added cinnamon to my coffee but am open to other stronger spices. How about you?

Let’s look at other methods of brewing next time.