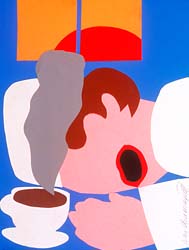 The reason I am asking this question is that last weekend, I went out of town with some friends and I had some realizations when it comes to coffee. So we went out Saturday night, right? We had some drinks and afterwards, we had some coffee. Of course, it was I who instigated the early morning coffee run. What surprised me was that a friend of mine kept on vehemently refusing to have some of this delectable brew!

I kept on insisting that it would be great after a long night out drinking alcohol, right? Well he said that he just could not take the chance of drinking coffee and then not being able to sleep. I thought it was ridiculous at first and then I realized that there was some truth to what he was saying! After all, I drink coffee to stay awake (at least that’s what is in my mind).

So we got around to talking about how coffee keeps you awake and all that stuff. Anyhow, I realized that coffee does not really keep me awake anymore – unless I have several cups in a row. I am not alone – I read this post by Shalini wherein she was talking about how addicted she is to coffee. I am sure that many of you would be able to relate to this somehow.

So should I do something about this? Should I cut back so that coffee will keep me awake again? I don’t know – I don’t think I even want to.