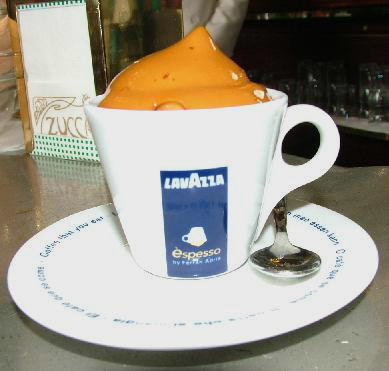 At first I thought it was a typo – but Espesso (sans the “r”) is actually a play on the Italian word “spesso” meaning “thick.” And yesterday, America’s first solid Espesso was served at its Lavazza shops in Chicago for $2.49.

The intriguing Espesso is a creation of Catalan chef extraordinaire Ferran Adria (touted as the world’s most innovative chef) who has been obsessed with defying the elemental laws of food – coming up with things like frozen parmesan air and liquid ravioli at his acclaimed Barcelona restaurant.

Espesso made its debut in Europe 4 years ago, and consists of espresso and a secret ingredient which is put in a pressurised canister and left to set for 12 hours. When customers order the drink, it is then sprayed directly into the cup, where it is moussy, cold and solid.

You can get it as a plain espesso, or as an espesso cappuccino or espesso macchiato – the latter two come served with solidified milk, served together with the solidified coffee.

How cool is that?