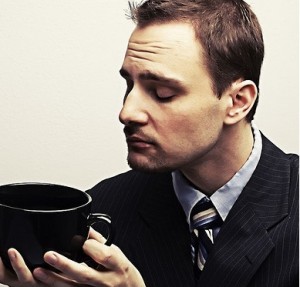 You may not know that a current promotion at Starbucks allows you to buy a second drink in the afternoon at half price if you bring back the receipt from your morning purchase. It’s called “treat receipts.”

We defintely seem to have an obsession with caffeinated beverages in this country. Some make the daily (or twice-daily) grind at Starbucks, others have local joints they frequent, and still others have fancy equipment for brewing their own concoctions.

Some of us are just in it for the caffeine buzz, but other folk think coffee is more than a cup of joe: in fact, it’s a way of life.

And those people need fancy toys like the following.

True coffee snobs will know that buying whole beans is better than getting grounds, because they’ll be fresher. However, you’ve got to be able to make grounds before you can brew a cup.

Bags of beans can usually be bought at local coffee joints or specialty coffee shops. Some places even sell chocolate-covered coffee beans, which are a sweet and bitter piece of crunch paradise.

I’ll get to the fancy machines in a second, but there’s nothing purer for coffee-making than a French press, fresh grounds, and boiling water. On my first camping trip, I had French-press coffee and real oatmeal while we watched the sun come up.

It was the best cup of coffee I’ve ever had, and I believe the French press had a lot to do with that.

This might not necessarily be considered “equipment,” but it’s a definite must-have. Coffee snobs, as we are called, need to have something outside of the corporate coffee chain. Whether or not the coffee is actually better is subjective, I suppose, but supporting a local business is always a good thing.

Local joints can also have more control over where they buy their beans, because coffee can be a hot-topic political issue — free trade and fair trade, and so on. A rabid coffee snob wouldn’t be caught dead in a Starbucks, regardless of how bad the need for caffeine.

There’s something oddly relaxing about the hiss of steam turning regular milk into the wonderful frothy goodness that comes atop a great mug of cappuccino. It’s even more relaxing on a Saturday morning when you’re in your pajamas and the whole world is chilling out.

Cappuccino is like hot chocolate for grown-ups (not that grown-ups can’t drink adult hot chocolates), and making it at home is an extra bonus. There’s lots of places to get these spiffy machines; the local coffee shops usually sell them, and there are also online at specialty sites.

For those on the prowl who are ready to drop several thousand dollars, you can get restaurant-quality ones from wholesalers.

Coffee tastes better when you’re sipping it from your mug with your kids’ photo on it, the catchy phrase that always makes you smile, or the travel mug that fits perfectly in your car. We’re really sentimental beings, and there’s always one small thing that can make a cup of coffee that’s pretty darn good to begin with really, really spectacular.