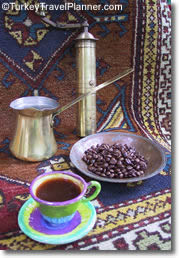 So, how do you make Turkish coffee? First make sure you have an ibrik or Turkish coffee maker. These are available online if you can’t find them in your local stores.Next, grind your coffee beans fine. You want to have it become so fine it is almost powdery. Grinding just before you use the beans also guarantees its freshness which is another reason why Turkish coffee is so delicious.

Fill your ibrik in this order sugar first. The water is poured next. Some coffee lovers recommend using cold coffee. Then pour the coffee on top. All the measurements are on a per cup basis. You can use the fin can or Turkish coffee cup to measure the water into the ibrik, just make sure it only goes as high as the base of the neck of your coffee maker. You put about 1 to 2 heaped teaspoons of coffee per cup.

Put the ibrik on your heat source – yes your stove will – on low heat. You should leave it on until the brew rises but should not overflow. Make sure that you see only froth and no boiling water. If the water is boiling you used too little coffee and the brew is ruined.. Once the brew settles, put it back on the heat. The third time the brew froths up, it is ready to be served.

By the way, don’t stir it! Read the next post to find out why.