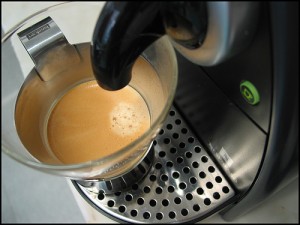 I have been using a rather beaten up old tea strainer to make my coffee at home. I realise that this is a shocking thing to say and that coffee purists will be up in arms but I wanted to get it off my chest. Whenever anyone had the misfortune of seeing me making an untidy of coffee I would laugh it off by saying that I am half Turkish and that some of the coffee grains need to enter the drink for me to enjoy it. Having said that, it was always kind of embarrassing if anyone caught me in the act.

You see, I am a relative latecomer to the pleasures of a cup of coffee and it has taken me a while to get around to kitting out my kitchen. I started off on instant coffee and have been slowly building myself up to bigger and better things.

The incident which really made me step up my drive for a better cup of coffee at home happened when I went on holiday to Spain. I ordered a frothy cappuccino from a little café next to the beach and it was honestly the tastiest thing I have ever drunk. Comparing it to the sludge I made at home is like comparing a classic Jimi Hendrix song to one of Mr Blobby’s musical offerings.

Even when I got back home I still had the delicious taste of those cappuccinos (yes, I had several) on my lips. I therefore decided that it was time to seriously look for a way of improving my home made coffee. I had a look around and discovered that modern coffee machines are actually less expensive and far easier to use than I had expected.

Does It Come With a Training Course?

Having never owned one of these machines before I had thought that they were big, cumbersome beasts or else sleek but extortionate pieces of machinery. Certainly the cappuccinos I had drunk in Spain came out of a wheezing machine which had various levers and spouts. New staff there probably require several weeks of intensive training before they are let loose on it.

It was therefore a surprise to find that a home coffee maker can be both compact and easy to use. I chose one which was pretty cheap and to be honest I didn’t have my hopes up all that high. I thought that at best it would do the same sort of job as my old tea strainer and that at worst it would refuse to do anything at all.

Imagine my surprise when it poured out a cappuccino which was at least the equal of those I had been served beside the beach. Now I can invite friends over and proudly show off my coffee making process instead of sneaking into the bedroom to do it.