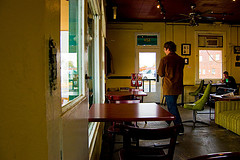 Now if that isn’t one of the most pompous drivel that I have read for a long time (well, probably since yesterday). This is exactly what was going through my mind as I read about Jeff Simmermon’s experience at the Murky Coffee store in Arlington, VA. So what happened?

Simmermon reportedly ordered a triple shot of espresso dumped over ice. Now you probably know that this is not commonly done but hey, who said you had to drink coffee in a certain way? Well, the management of Murky Coffee says so. Read the barista’s reaction as Simmermon himself described it:

And the guy at the counter looked me in the eye with a straight face and said “I’m sorry, we can’t serve iced espresso here. It’s against our policy.”

This reminded so much of a similar incident that my husband and I experienced at a local Starbucks store. The coffee became lukewarm because we were chatting and smoking. So he went back to the counter to ask for it to be reheated. We know that purists disallow reheating coffee as the heat “ruins” it. Despite my husband’s repeated requests, they wouldn’t heat the coffee!

So what is the deal here? Preserving the integrity of coffee or giving in to a customer’s request? Probably because I am not a purist, I tend to lean towards the latter. We all enjoy our coffee in different ways, give us some leeway here!