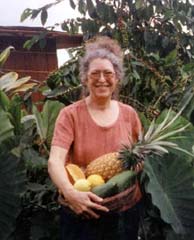 Hawaii’s annual Kona coffee competition just finished yesterday. This year, Pearl Estates Organic farm was chosen as the best tasting coffee in the top cupping competition. This must make Pat Pearlman, owner of the said farm (image on the left), proud. Second place was awarded to Pau Hana Farms while Kona Cafe came in third.
This is the 20th year of the annual competition. This year there were over 70 farmers competing. Each one brought in a 50 pound sample of their harvest, which must have been picked between June 1 to October 20 to be eligible. Five pounds of that sample would then be entered in the cupping competition. The coffee is then judged based on six categories: aroma, fragrance, nose, taste, body and aftertaste.

This year’s crop promises to be a good one according to cupping judge John King of Harold King and Co. He said that 80 percent of the entries make for great Kona coffee. That is definitely great news for those who choose Kona coffee for their daily cup.
[tags] coffee,Hawaii,coffee fest,cupping,competition [/tags]