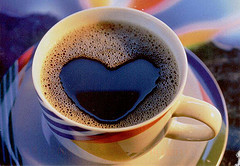 Oh yeah? Well, if you base your beliefs on the results of a study conducted by researchers at the University of Madrid, drinking a lot of coffee can increase your lifespan. The study involved men and women who consumed large amounts of coffee and they found out that the risk of death of these people were considerably lower than those who didn’t drink coffee.

Coffee drinkers in the study had slightly lower death rates than non-coffee drinkers over time, whether their drink of choice had caffeine or not.

The findings do not prove that coffee is protective, but they strongly suggest that drinking coffee in large amounts is not harmful if you are healthy, researcher Esther Lopez-Garcia, Ph.D., of the University of Madrid, tells WebMD.

The risk reduction in men was smaller and could have been due to chance.

“We can’t say from this one study that coffee extends your life, but it does appear that it doesn’t increase the risk for death for people who are healthy,” she says.

Oops – apparently I was a bit overexcited. There is indeed a reduction in death BUT there might be other factors in play. Again, I stick by my original belief – try to stay healthy and drink as much coffee as you think you need. If you feel ill effects because of too much coffee, then reduce intake. It’s as simple as that.