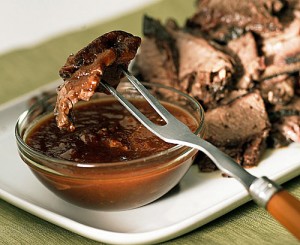 I met an old friend earlier today. Even after more than a year of not seeing each other, it was great just sitting there for hours and talking. Of course, our conversation eventually focused on food and just how good it feels to eat. (By the way, I don’t have to tell you that we met at Starbucks, do I?)

So anyhow, when I got home, I decided to pass by the grocery store to get some stuff for dinner. I knew I had a steak or two in the fridge, but I wanted to spice it up. Guess what I found? Some Jack Daniels hickory BBQ sauce! Needless to say, I am STUFFED.

That hasn’t stopped me from browsing through some recipes that I somehow stumble upon online. (Seriously, they just seem to pop out. It’s not like I purposely seek them out!)

Here’s one that I think you will love – Texas hickory smoked brisket with coffee barbecue sauce. Now doesn’t that sound heavenly? I found the recipe at CTNow, and the image and words combined just made my mouth water despite the really good meal I just had. Here’s the recipe for the sauce, which I think will be an excellent partner for any other roast meat:

1. In a heavy-bottom 4-quart pot, combine the onion, garlic, jalapeños and chiles with the coffee and beer. Bring to a simmer over medium-high heat, then reduce the heat and simmer until the onion is translucent, about 10 minutes.

2. Stir in the tomato paste, ketchup, maple syrup, molasses, cumin, salt, chile powder and red wine vinegar and simmer for 20 minutes, stirring occasionally. Remove from heat and blend the sauce using an immersion blender or in stages in a stand blender, until fairly smooth. Set aside.