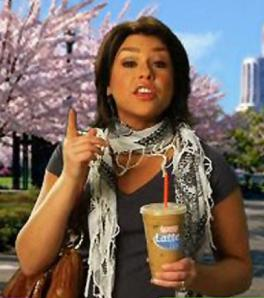 Oh my, just when I thought that people were becoming more open minded and rationale! I have never been a fan of Rachael Ray, let me say that outright. This latest uproar over her makes me kind of feel for her though. For those who may not know, she is a spokeswoman for Dunkin’ Donuts. So there she was, doing her job, being her uber perky self as usual, right? She made this Internet commercial about how good Dunkin’ Donuts coffee is (by the way, I do like Dunkin’ Donuts coffee).

Suddenly, out of the blue, she is being accused of symbolically supporting terrorism! Come on now, this irritatingly cheerful person you see on TV several times a day a supporter of violence? As much as her personality and shows grate on my nerves, I just cannot see her trying to promote terrorism by trying to get away with wearing a kaffiyeh look-a-like in a Dunkin’ Donuts commercial.

Perhaps Michelle Malkin, the blogger who put up these suggestions, is mistaken? Or maybe she has got something personal against Rachael Ray? Seriously, the drama of it all! Why can’t a person wear what she wants to when plugging good coffee without being misunderstood? More than this, who says that the kaffiyeh is only used by terrorists?

Anyhow, Dunkin’ Donuts has pulled the plug on this commercial. In the interests of peace, I suppose it was the right thing to do. Now let me go get some of that iced coffee to cool off.