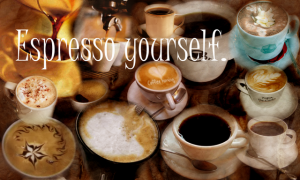 I guess that’s a variation of the old saying “tell me who your friends are…” – you know how that one goes. But is there really any truth to this coffee preference thing?

I don’t really know, but an Australian coffee company claims to know a thing or two about coffee psychology theory. According to John Ronchi, co-founder of Campos Coffee on Wandoo St, Fortitude Valley, he has noticed a connection between coffee preferences and personality traits. His findings?

Mr Ronchi said well-dressed corporate types usually opted for an espresso or black coffee with no sugar, while patrons who liked to laze in the sun outside Campos ordered a latte.

What’s more, ice coffees and frappacinos are popular in the warmer months, but almost always among young women.

If you are scoffing (like I was when I first read the statements), you might want to know that Ronchi’s observations are also backed up by Dr Alan Hirsch, the director of the Smell and Taste Treatment and Research Foundation, a US institution. He says that based on research (and personal observation, of course), “those who drink short blacks are often ambitious, goal-driven and no-nonsense, while cappuccino drinkers were probably witty and classy. The humble latte is often drunk by mums or 20-something students, while the heart-starting espresso conveys sophistication.”

I now have a personality-identity crisis. After a huge meal, I like espresso. I guess I am sophisticated then? I normally get a latte at Starbucks, though. Then again, I am neither a mum or a 20-something student. Oooh, I alternate between cappuccinos and lattes, I just remembered. So does that mean I am witty and classy sometimes? I seriously doubt it.

You see what I am getting at here…? So what coffee do you drink again?