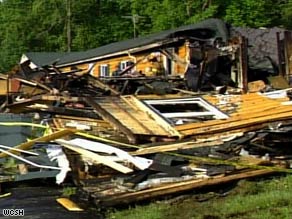 Remember that piece I wrote about the topless coffee shop in Maine? Well it was given permits, the council approved its operations; so it has been up and running for a while now. The thing is, it was recently burned down.

Last week, someone deliberately set the Grandview Topless Coffee Shop on fire. Apparently, having topless waitresses and waiters proved to be too hot to handle for someone. CNN carried the story:

The blaze consumed the risque, small-town business shortly after midnight, said Vassalboro Fire Chief Eric Rowe. He described the flames as “severe” and said the building was a “total loss.”

“I really liked it here,” waitress Krista Macentyre said after learning the cause of the fire. “We weren’t hurting anyone. I don’t know why someone would do something like this.”

The shop’s proprietor, Donald Crabtree, said he is determined to rebuild. “This is home” to a lot of people, he said.

For Crabtree the coffee shop literally was home. He and his two daughters, their two boyfriends, and his two infant grandchildren lived in quarters attached to the Grand View. The fire forced them to relocate to a motel.

While I was never really sold on the idea of a coffee shop with topless service workers, I do not think that anyone could really wish this on the owners of the shop. After all, just because someone’s offending your sensibilities does not mean you have to strike this way. More so, some people actually enjoyed having their morning (or afternoon) coffee in this shop. Our best wishes to them…