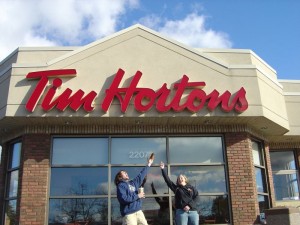 Bus driver Rick Bazinet Jr. was going about his usual night and made his usual stop at a London Tim Hortons – Canada’s answer (and a very good one, I hear!) to Starbucks. He went to the washroom and hit gold – he found a bag full of money. It was actually a Brinks bag, which apparently had been left by guards who filled the ATM in the store earlier. The bag contained $80,000 in 20 dollar bills.

Now put yourself in Bazinet’s place. What would you have done? I will be totally honest and say outright that I would have been so tempted to grab that bag and make a run for it. Finders keepers, eh? But deep in my heart, I also know that I would have done exactly what Bazinet did.

He went back to the store, told the clerk what he found, and returned the money. He said. “In hindsight, I guess it would have been nice to have. And Christmas sure would have been great, but it wasn’t mine. That’s the way I was brought up and it’s what I teach my children.”

Despite all the evil we witness on a daily basis, there are still people who know the right from wrong and who have the courage and strength to do the right thing. That’s a comforting thought – as comforting as a steaming hot mug of coffee. 🙂