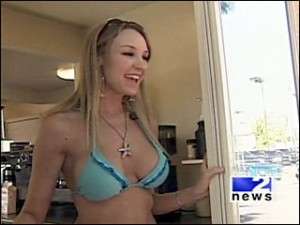 Earlier this year, the talk was about the topless coffee shop in Maine. It did achieve success but its luck turned sour when someone burned it down not long ago. This time, there is another coffee shop running its operations along similar lines, though it is not as controversial as the topless shop.

Bikini Espresso has opened in Torrance, California and it does not take smarts to realize that their highlight involves bikini clad servers and baristas. They have only been open for several days but it seems that the people in the neighborhood think that they have a hit in their hands.

Barista Chelsea Turnbo says that they are having a lot of fun and that their clientele has been varied. While more men queue up for drinks, they also get women – even old ladies!

Perhaps the fact that they are quite near to the beach adds to the accepting spirit of the customers. Then again, customers are saying that while the bikini clad baristas are the unique feature of the coffee shop, the coffee isn’t all that bad. In fact, they say that the coffee is quite good.

Still, the coffee isn’t so good that the critics have been silenced. There are still those who don’t favor the idea. It is no surprise, I think. I think that it is not that much of a big deal, though. I mean, you see people in bikinis every time. What might be more interesting is to actually work in the shop, don’t ya think? Not that I would even be considered for the position!