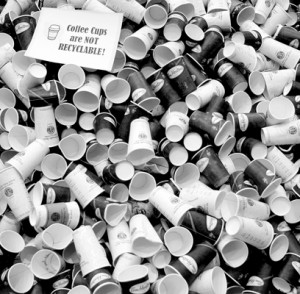 This one’s for our java chugging friends up in Canada, specifically those who live in the Toronto area. Apparently, there has been a lot of talk going on about coffee cups. The city’s public works committee have been taking a look at the consumption of coffee and the use of coffee cups, whether plastic or paper. The situation is this: it seems that the residents of Toronto are using way too many coffee cups. What is way too many?

The Standard has this story:

Toronto residents continue to send about 350 million cups and lids to the city’s landfill because neither the paper cups nor the plastic lids are currently accepted in the city’s blue bin program.

First proposed in December, along with a controversial plan to force retailers to charge five cents per plastic bag, intense lobbying forced the city to back down from its coffee cup stance. Instead, it formed a 40-person working group, which has spent at least $50,000 on consultants to address the issue.

So what about the issue again? Well for now, it has been shelved and will be reconsidered later in June. The idea is that the working group should find a less controversial solution to their trash problem.

I can very well understand the concern here. 350 million cups is no joking matter! Perhaps “friendlier” paper cups? Or how about giving incentives to those who do NOT use paper cups instead of penalizing those who use them? Got any other ideas?