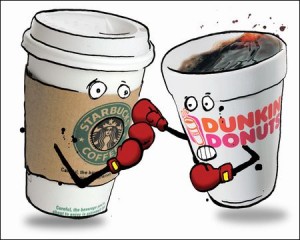 The coffee wars are far from over it seems. Just when I thought that the furor over the McDonald’s ads (which are supposedly jibes at Starbucks) was over, another party has joined the fray. Dunkin’ Donuts apparently commissioned a double blind test against Starbucks and guess what? They won.

Seattle PI has this report:

“Try the coffee that won,” the Dunkin’ advertisement urges. “And see why America really does run on Dunkin’.”

Dunkin’ Donuts is really upping its efforts to spread the word and step on Starbucks as it goes along.
They have even created a web site called Dunkin’ Beat Starbucks. With the tag line “It’s just more proof that it’s all about the coffee (not the couches or the music)”, Dunkin’ is sending out a very strong message.

What does Starbucks have to say about this? Deb Trevino, Starbucks spokeswoman says:

“We more or less introduced the coffee culture to the U.S. and extended it across the country, and so one would expect that other folks trying to get into this business would look to us for a comparison.”

Now here is my question: Which coffee do you prefer?