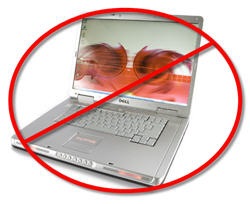 Let me ask you first, aside from the coffee, what do you look for in a coffee shop? Tea? Bagels? Eggs Benedict? Free internet?

I would have to say yes to all of them! Free Internet, in particular, comes in quite handy especially when the Internet at home goes bonkers on me. I am quite happy that I am not in New York City at this moment, though. According to the bits and pieces of rumors that coffee shop lovers have been spreading around, several coffee shops in the city have already “banned” the use of laptops in their premises. Naturally, this includes the stopping of free Internet as a perk.

So what is the reason behind this infuriating action by the coffee shops concerned? They say that people who bring their laptops to coffee shops and access the Internet there tend to linger and not spend much on drinks and food. On the other hand, there are other higher paying customers who might not have the chance to sit down and do their thing because of the laptop lugging crowd, who tend to “clog up” the cafes.

While not ALL cafes in the city have followed suit, there are several which have completely banned laptops. A few others have restricted the ban during peak hours, in order to maximize the flow of customers.

Can you imagine not being allowed to hang out at the coffee shop if you take your precious little netbook out of its case and play with it? I think it’s silly.