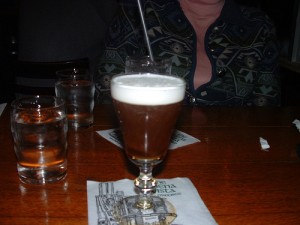 Yesterday, the baristas at the Buena Vista Café in San Francisco attempted to make the world’s largest Irish coffee. As can be expected, they want to set a world record. So what went into this gigantic drink?

Let’s see – 10 liters of whiskey (almost 10 liters, that is), 10 gallons of coffee, a gallon of heavy cream, and over 4 pounds of sugar. This concoction was served in a giant glass, which is 3 feet tall. Its capacity is 12 gallons. Naturally, this glass was specially made for the event, with a tap at the bottom to make for easier serving.

The Mercury News has this report:

“We took the same ration that we’d put in a 6-ounce glass and converted it to a 12-gallon glass,” Carden said.

The drink was initially going to be 15 gallons, but the cafe chose a 12-gallon glass to help keep the proportions and shape of the glass in line with the traditional Irish coffee they serve.

The unveiling of the Irish coffee happened around 1 p.m. today and it took about 20 minutes for four bartenders to pour the ingredients in the glass.

“Everybody went wild,” Carden said of the crowd when the drink was revealed.

Attendees of the cafe’s 56th Irish coffee anniversary celebration were given drinks from the huge glass, which had a tap at the bottom.

Bartenders added cream to the top of each individual glass served.

Guinness needs time to review the materials supporting the record setting attempt but I sure hope they get it.