Cafes most often welcome only humans unless the owners state otherwise. But there’s this unique cafe in Vienna which has friendly cats as hosts.

Called Cafe Neko, this place was opened last year by Takako Ishimitsu, a Japanese woman who has been a resident of Vienna for more than 20 years now. Originally from Nagoya, Japan, the 47-year-old owner said her goal is to share part of her culture with the Viennese. Neko is a Japanese word that refers to cat. 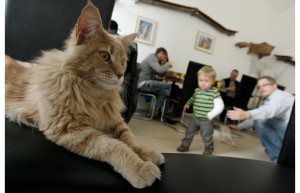 What’s unique about this cafe is it has five cats which the customers can stroke and play with if they want. These feline hosts are Luca, Momo, Moritz, Sonja and Thomas. They came from an animal shelter and are free to roam, sleep or sit on the laps of customers visiting the place.

Ishimitsu revealed it took her three years to convince Vienna city officials to put up her Cafe Neko. Sanitation of the place was a major issue in their negotiations.

The Japanese owner added that Cafe Neko is her way of making people happy while enjoying their favorite drink and snacks. She said it is a good opportunity for busy people and those with allergies to get in touch with their favorite pet which they cannot personally raise at home.

The only strict policy that customers have to adhere to when visiting this cafe is not to bring their dog.

Cat cafes are common in Japan. In fact, some 40 such cafes currently exist in Tokyo with the very first one opened in 1998.