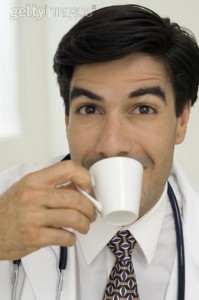 What do you do when you have been up for a day and a night working feverishly to finish a deadline and you still have 12 hours or so to go? Option number 1 – go to sleep, deadline be darned. Option number 2 – drink your favorite energy drink. Option number 3 – drink all the coffee that you can.

I would choose the first option if I could, but that is not always possible. If the Queensland Health Department is to be followed, though, doctors should just increase their caffeine intake if they find themselves in a similar situation. Based on a policy paper on fatigue risk management, Queensland Health proposed a plan for the “strategic use of caffeine” that will be “beneficial to doctors.”

Initial thoughts: I can’t believe they even considered the idea, much less wrote it down on paper! This is what the paper says:

“The recommended dosage for a prolonged and significant reduction in sleepiness during a night without sleep has been suggested at 400mg of caffeine… equivalent to about five to six cups of coffee.”

Now if they were talking about an office worker, maybe I wouldn’t be so befuddled. But they’re talking about doctors here – people who actually work to save lives! If they are exhausted, shouldn’t they get some rest instead of trying to keep going?

This is exactly what medical associations in Australia are saying:

Well I hope they do something about it. We all love coffee but having your doctor see you (or operate on you!) while on a caffeine high is a scary thought!