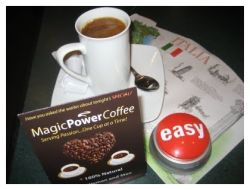 We’ve heard of all sorts of coffee drinks that claim various benefits. I am talking about slimming coffees and the like, but until a few minutes ago, I had never heard of Magic Power Coffee! Some of you might know about it, but for the sake of those like me, allow me to briefly describe this product.

Magic Power Coffee is being marketed all over the United States as an instant coffee drink. The uniqueness of this product lies in the claim that it functions as an aphrodisiac. Yup, it is supposed to stimulate sexual arousal in both men and women!

So what’s wrong with that? It could very well be a better alternative to Viagra, right?

The FDA, however, disagrees, and has released a statement to the effect that it can be harmful. The government agency is quite worried about the fact that the coffee drink is labeled as an “all natural dietary supplement.” You know how it is these days – people market products as “all natural” and as a “dietary supplement,” and these products are supposed to be 100% safe.

I guess there is no such thing, though. A spokesperson from the FDA says that the label is misleading, and that in fact, Magic Power Coffee can cause serious damage. Men who are using certain prescription drugs, for example, can experience a sudden plummet in blood pressure due to the interaction of the active ingredients.

If you still wish to try the potency of this magic drink, I suggest you check with your doctor first. Better yet, just stick to the good old brew!