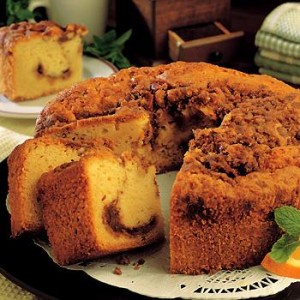 Have you ever wondered where the coffee cake came from? Today, coffee cakes are commonly eaten together with coffee – or any other drink, for that matter. In the old days, though, did they already have coffee cakes?

Rob Carlton tells the tale of the coffee cake:

Like most foods, coffee cake is an item that evolved over hundreds of years and across continents. People had been preparing honey cakes since biblical times. Gradually the French came up with galettes, the forerunner of the ubiquitous Christmas fruitcake. Galettes also lead to the invention of sweet yeast rolls that eventually resulted in Danish coffee cakes, which really did contain coffee, by the way.

For some reason, the Dutch and Germans in New York, New Jersey and Delaware became particularly famous for their coffee cakes. Their recipes from the colonial times are very similar to those used today. Meanwhile Scandinavians had introduced their versions as well as the concept of the coffee break — for which we are all ever grateful. The British have their own version that includes toffee.

By 1879, coffee cakes were well-known in America and there were already countless recipes for crumb cakes, streusel cakes and streusel/crumb-cake combinations. Streusel cakes have that swirl of cinnamon/brown sugar throughout the center while crumb cakes have a topping of crumbly flour, sugar and butter and cinnamon. However, food purists know that most Americans have these terms confused. Streusel (pronounced STROI-zuhl in German) means “granules” and actually refers to the crumb topping, not the swirl. Whichever way you pronounce it, the effect is still the same — delicious.

So there you have it, the story of how coffee cakes came to be the popular cake that we like today. Now I don’t know about you but I suddenly have this urge to get me some coffee cake!