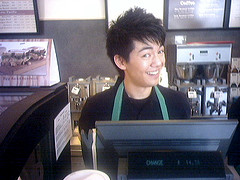 A San Diego judge has just become a hero to a hundred thousand (estimated) Starbucks baristas. How so? He ordered Starbucks to pay its baristas – both former and current – more than $100 million. This order is the result of a case filed against the giant coffee chain claiming that the company did something illegal by allowing supervisors to receive tips, which should have gone to the baristas. Here’s the report from The Telegraph:

In a ruling that the company immediately said it would appeal, the judge said the company must pay back around $87 million in tips plus interest of $19 million.

Starbucks recently launched a series of initiatives aimed at boosting its business, which has suffered from a dip in sales and a near-50 per cent fall in share price over the past year.

It was not immediately clear how the $100 million might be divided up between the estimated 100,000 current and former baristas [who make the coffee] who have worked for Starbucks in California since 2000.

Terry Chapko, a lawyer for the plaintiffs, was quoted by the Los Angeles Times as saying that the baristas were “subsidising Starbucks labour costs” by helping the company pay its supervisors.

“This is about getting money back to the lowest-paid employees,” he said.

Do you give tips when you go to Starbucks? Does it bother you if the tip went to the supervisors as well as the baristas? I think they should all share it – but that’s just me. If I were a barista, I’d be one very happy camper right now, though.