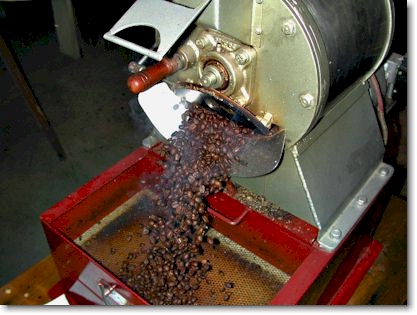 Coffee roasting is a chemical process by which aromatics, acids, and other flavor components are either created, balanced, or altered in a way that should augment the flavor, acidity, aftertaste and body of the coffee as desired by the roaster.

The first stage of roasting is endothermic (beans absorb heat), where the green beans are slowly dried to become a yellow color and the beans begin to smell like toast or popcorn.

The second step, often called the first crack, occurs at approximately 205 °C (400 °F) in which the bean doubles in size, becomes a light brown color, and experiences a weight loss of approximately 5 %. The corresponding Agtron number for this color is between 95-90 (Davids, Roasting, 68).

In the next step the temperature rises from 205 °C to approximately 220 °C, the color changes from light brown to medium brown (Agtron # 60-50), and a weight loss of approximately 13% occurs (Davids, Roasting, 68). The resulting chemical process is called pyrolysis and is characterized by a change in the chemical composition of the bean as well as a release of CO2.

The second step is followed by a short endothermic period, which is followed by another exothermic (beans release heat) step called the second crack. This second pyrolysis occurs between 225-230°C, and the roast color is defined as medium-dark brown (Agtron #50-45) (Davids, Roasting, 68). The second pop is much quicker sounding and the beans take on an oily sheen. Roasting well into the second pop or darker is not favorable since volatile aromatic compounds are stripped off and oils on the outside of the bean are more easily oxidized. Unfortunately, in America the trend is to roast to a dark black, with a bright-shiny surface, and a final temperature of 240°C. This type of roast is often preferred since it masks poor blending, dirty machines, and stale coffee.

Every coffee will taste different at different roast degrees. A roast will bring out certain nuances that will be favorable to amplify. Until there is a scientific way to predetermine proper roast degree it is necessary to experiment until you achieve the desired flavors.