Whoever said that coffee is a man’s drink must have been, well…a man. Supposed historical accounts allude to coffee as being one of the suspect reasons for frigidity in women. I believe that thinking has long been dispelled but I digress…  Let us now do a quick  rundown of how a man is expected to drink coffee. 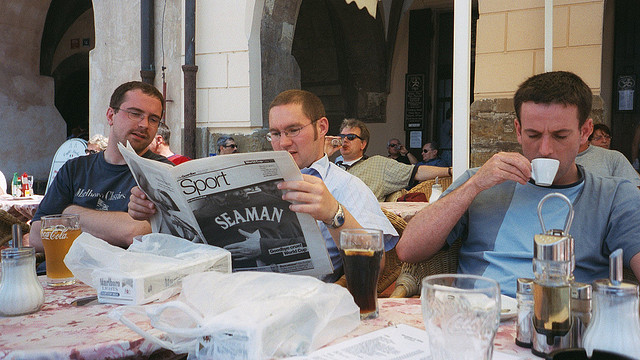 This is probably the most traditional, old-fashioned thinking even, of how men should be drinking coffee. Men are always perceived to be more inclined to simpler choices. There is nothing simpler than a cup of black coffee but of course such simplicity is not to be taken as being less in flavor. It would all depend on the coffee seeds used and how they were prepared.

We now see modern men drinking all kinds of coffee preparations. From the the more common coffee taken with sugar and cream to the more adventurous concoctions with whipped cream or liquor. More than a way of determining real manliness, coffee choices appear more related to certain personality traits or just plain taste choices.

Real men are supposed to start and end their day with coffee with several coffee drinks in between. Aren’t we all familiar with busy career men rushing during mornings, willing to skip breakfast but not without a hot cup of coffee to jump-start the day? These same men will have their coffee breaks or meet with business associates over coffee.

Coffee appears to be the default drink for the day when men are talking among themselves, possibly shifting to liquor as day turns to night. Still, it would be coffee that would offer the refuge for those who make the mistake of over-drinking. For busy men, drinking coffee offers the best excuse to stop and revive dulling senses.

Brewed and Not Instant

I don’t exactly know what makes brewed coffee more manly than instant coffee. It probably has something to do with putting in more effort to get the desired coffee flavor. Even in roasting and brewing coffee, there is a more manly way of doing it.

Rather than using modern coffee percolators and other easy-to-use brewing equipment, crude and do-it-yourself coffee brewers are perceived to be more manly to use. This must be associated with another manly stereotyping which expects men to do something out of nothing. It must be very stressful to be a man drinking coffee with all these expectations.

So there you have it, the most common perceptions of how men should be drinking their coffee.