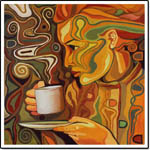 Alright I am officially confused. If you recall, I posted an entry on Coffee and the Risk of Miscarriage a week or so ago. That post was all about a study stating that small amounts of coffee during the early stages of pregnancy do not increase the risk of miscarriage. Today, I saw an article on Yahoo about a study that states that coffee can double the risk of having a miscarriage! So which one do I believe?

According to Dr. De-Kun Li of Kaiser Permanente Division of Research:

Women who are pregnant or are actively seeking to become pregnant should stop drinking coffee for three months or hopefully throughout pregnancy.

Ok, that was the original premise. She qualifies her statement though:

To me, the safe dose is zero. If you really have to drink coffee, try to limit it to one cup or at the most two cups.

There you go – the limit is 2 cups, which the first research we featured also mentioned. So I guess it is the amount that determines the results. Anyhow, another research done at Harvard Medical School shows that coffee decreases the risk of ovarian cancer. Researcher Shelley Tworoger says:

With regard to caffeine and caffeine-containing beverages, we generally observed a lower risk of ovarian cancer with increasing intake.

This, at least, is a positive thing for us coffee drinkers, don’t you think? Just a note – decaffeinated coffee does not count. Apparently, it is the amount of caffeine intake that has the benefits.