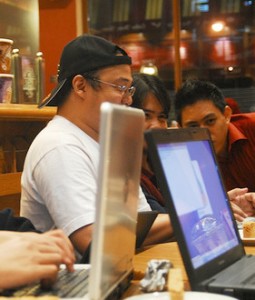 Remember my post on some New York coffee shops starting a ban on laptops and taking back their free WiFi facilities? I was aghast, just like many other people who frequent coffee shops. Now, it seems that the trend is going the way of those coffee shop owners.

More and more coffee shops are realizing that they might just be on the losing end with their offer of free WiFi. It is not uncommon to see a coffee shop filled with people, majority of them sipping coffee with the unmistakable glow of their laptops shining on their faces. While some make the trip to the counter more than once, many patrons actually sit there with their laptops plugged into a wall socket, nursing their drink for as long as they can. The result? Low – or almost no – sales.

This is what’s bothering coffee shop owners these days. They say that there are times when, even when there isn’t an empty seat in the shop, they are not making any sale. Coffee shop owners say that inherently, they are providing a value added service, but they also expect their “backs to be scratched.” To cut the long story short, people who use WiFi and plug their laptops in at coffee shops should not just sit there for hours and not buy anything.

One would think that this is common sense. Then again, with the economy being as bad as it is, it is also understandable that some people would want to spend as little as they can while using free WiFi and free electricity.

All I can think of is that if the two parties do not reach a compromise, we just might be seeing the death of free WiFi in our coffee shops. Nooo….